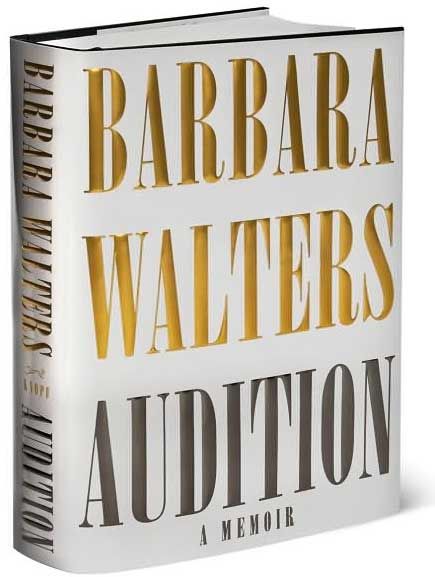 I just finished reading Barbara Walters’ memoir. It’s called “Audition” and I thoroughly enjoyed it. That woman has lived an amazing life. Starting out in television journalism when it was still new, and dominated by men, she paved the way for countless women and set a definitive precedent for the on-air news personality.

I remember as a young girl watching the Barbara Walters Special, as she interviewed politicians and other movers and shakers. She seemed so cool and calculating; never backing down. I often felt sorry for her subjects, some of them forced to reveal their true colors by answering (and sometimes refusing to answer) her probing questions. The book also contains some very enlightening and humorous back stories.

I was familiar with most of the interviewees named in the book, if not the actual interviews. She mentioned that eventually the network, in trying to attract younger viewers, leaned toward the sensationalism of celebrities and murderers instead of politicos. It was and still is a very competitive business.

Throughout the book, she spoke candidly about her mother and father, her sister, her adopted daughter, and her three marriages. I love her honesty.

She’s from my parents’ generation and grew up in a different time. She has watched the world change and has helped to bring about some of that change. The iconic Ms. Walters has been an inspiration to many women of my generation, including Oprah. She has also connected with a younger audience with the show she created in the late 90’s, The View.

The book was well-written and, except for the entire chapter devoted to Monica Lewinsky (remember her?), it was an engaging read. I feel like I got to know the very talented, ambitious, and sometimes insecure woman behind the fearless television presence.

At 84, Baba Wawa (RIP Gilda Radner) looks fabulous. She continues to enjoy success while, at the same time, reflecting on her life. At the end of the book, she says:

“In this time of instant Internet news, cell phones that take videos, and a profusion of blogs where everyone is a reporter, there will be little chance for any single person to have the kind of career that I’ve had. If I was, perhaps, atop of the game, I also had the advantage of being ahead of the game. How lucky I was. How lucky!”

Thank you, Ms. Walters, for telling your fascinating, inspiring story. What a journey!