Am I An Anarchist? 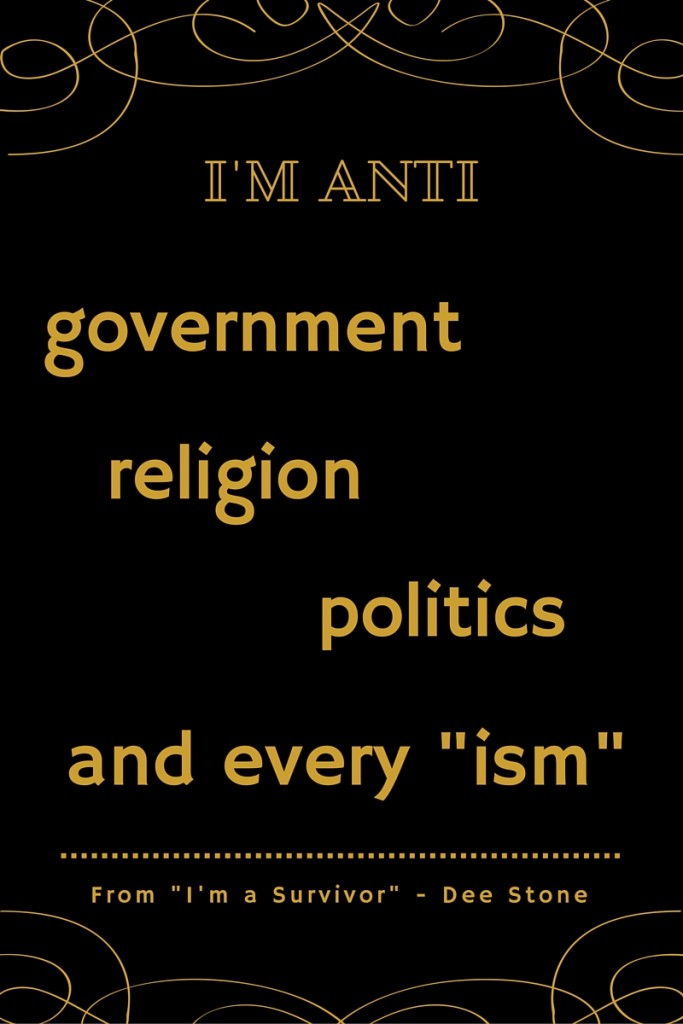 People sometimes say, “What are you, an anarchist?  Yes. I am unapologetically anti-government, -religion, -politics, and every -ism. I am a proponent of love, freedom, spirituality, and equality. I believe we all have a right to be, create, share, and coexist without the oppressive interference of some imagined authority.   Why would any self-directed, thinking human follow man-made rules that they had no say in creating?

Whenever you hear the word anarchy, it’s used synonymously with chaos and disorder.  We’re told we need governments, police, and armies to “keep things under control” and “keep people in line.”  We’re supposed to believe that, without thugs with guns threatening imprisonment or death, we’d all spiral into a hellish abyss of self-destruction.  To use my mother’s favorite word, “Bullcrap!”

The world we live in is already chaotic, in spite of all of the laws and regulations, searches, surveillance cameras, phone/computer snooping, and the ever-increasing number of other disturbing invasions.  Actually, a lot of the chaos and disorder in the world is in response to the over-reaching claws of governments, corporations, police, and armies.

Chaos is a natural thing. Nature itself is chaotic. Anarchy is simply a natural desire to be free from a restrictive, controlled existence.  I think the world needs more anarchists and less lemming-like, obedient followers.  Anarchy is empowering.  Rebellion is good for the soul…it gets the adrenaline flowing and puts a twinkle in your eye. It’s necessary for change.

Talk About It – Dee Stone Band

The other night, I was going through some old files on my computer and found a PDF I had downloaded in 2011.  It was from the website of a group called No Borders, which is associated with the Louisville Anarchist Federation Federation (LAFF).  I was happy to find the website is still up!  They don’t have any recent posts, so I don’t know what happened to them.

Regardless, there are some very interesting, well-written essays on the site.  Read a few and get in touch with your inner anarchist. 🙂

You can check out the site here.